Wednesdays are work-running ‘club’ days. I say club, its not really but a few people that, if they are around go for a run on Wednesday lunchtimes. It was the usual fast-running blokes but there was another girl today. She said she hadn’t run in ages, but looking at her athletic built I guessed she was under-playing it. And I was right – she still managed to get ahead of me L  It was a sub-zero day today and we went off-road and headed for the Braid hills. Even though a lot of the ground was frozen I still managed to stick my foot in a very deep puddle of thick mud. My new-ish trainers are now well and truly christened. I have had them for a while but they were still rather new and sparkly looking...now they are not. This is AFTER I cleaned them! 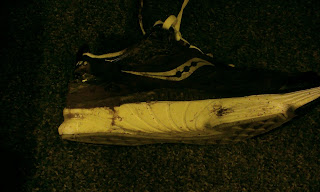 This route is pretty tough, made worse with icey tracks to contend with so it was good to have other people to keep me from giving up. It eemed to take twice the effort sliding a backwards every step so trail shoes are definitely on the shopping list – I do actually want to do a trail race this year, thinking about doing the Karrimor great trail challenge down in the lake district which looks like a nice one to start with.

Again, its nice to do a mid-week run in the daylight – makes such a difference, although I get back to my desk with bright red face that takes a while to get back to normal, eliciting ‘comedy’ comments from colleagues.