losing and gaining your running mojo

At last. Its been a while since I last blogged and feel I have been slacking.  This week seemed a good time to do one. Mainly as its been a funny one, running-wise.

finally last week I did what I have been meaning to do for about a year - go to the physio and get my ankle looked at. Following my last half-marathon in April 2012, I had acute tendonitis which pretty much scuppered my training for the rest of the year. It was only this year's Janathon where I re-entered the running fray. Its been ok but there have been on-going issues with my ankle from a little niggling pain and full-on knife-stabby kind of pain. So, of to the physio I went. Came out thankful I had not been told never to run again (couldn't even think of that) but still not in the most cheery of moods. Turns out I have shin splints and generallly the tendons in my foot don't like all the pavement-plodding I've been doing.

The main piece of advice was: get off road. Now that's fine in principle, I have been wanting to get into trail running for ages. However, I live in Edinburgh - right smack in the centre.  There are obviously parks etc. (hell - I live right beside Holyrood park) but they are not that big and the shitty weather that Scotland sufferes from about a good 75% of the time means soggy grass and lots of mud.  Also, while shortish runs wouldn't be a problem, anything over about 8 miles and you really can't avoid pavements and concrete.

Without really realising it, this news depressed me and I didn't really do much running this week at all, even the thought of it made me a bit teary. I had lost my mojo. It's happened before, and will probably again. All I could think of was 'damn, my training plan says 6 miles today and I just cannot face it'...and then felt guilty, which in turn led to a glass of wine to cheer me up. Not good.

Thankfully I had a long weekend planned. I was working on Saturday down in the deepest, darkest Dumfriesshire and decided to take myself away to the lake district after. My parents have a wee cottage just south of Penrith, and just on the cusp of the national park The weather was appalling but the forecast was sunny for Sunday.

My plan was to go to Keswick and run along Derwent water, and see how I went. Nothing really set in stone. I figured I could just come back the way I came if things didn't feel good. After a bit of wrong turns and meandering around the town looking for the actual lake. Things were looking very promising - dirt tracks rather than concrete paths, and the views were amazing with the snowy mountains in the distance. As you can see from the photos it was a bit mad weather-wise but still beautiful.

I was actually amazed at myself - I had no ipod an no water - I figured I would probably turn back at 5 miles but finding myself at the opposite end at 6.2 miles, I just decided to do the full circle - as long as I got a drink on my return I would be fine and I was really enjoying my run and the miles were just slipping past. Just as I set off again - I saw a blizzard coming in, and started regretting my decision. But thankfully, there was a section of woodland which was a bit of a buffer and eventually the blizzard passed over. By now I was feeling fully back in the game. I was starting to feel tired and sore by 10 miles and managed to get a bit lost again, adding about another mile onto the total.

So thanks to a change of scenery (and great scenery at that) and some encouragement from my good twitter-friends, I re-found my running mojo...until the next crisis. I also wanted to mention that I've been reading Born to Run by Christopher McDougall - I'm sure a huge percentage of running people will have heard of/already read this. It is a brilliant book and one that I'm sure will help me in any future mojo-losing incidents. I plan to do a post specifically on this book as I found it really inspiring. 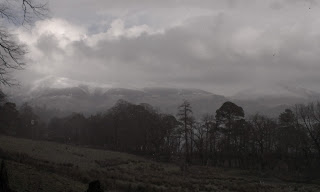 Posted by TheRunninggoth at 15:49 No comments: