This event was a special one for me as it will not only be the last one for me for a while, it also marks 10 years of running for me. Rather fittingly it was also the Lakeland Trails 10 year anniversary.

Thanks to various injuries I have decided to not to sign up to any more runs for a while (we'll see how long that lasts!). Anyhow, as it is 10 years to the month, I felt that this would a great opportunity for a wee race report/reminiscence on my running 'career' (haha!!) so far.

I have come to proper trail races quite late on, but was lucky enough to come across Lakeland trails shortly after my folks bought  wee holiday house down that way a few years ago. The first one I signed up to was the Coniston half marathon which was hands down the best event I've done (having a lovely sunny day for it helped greatly!). Nothing helps the miles go by than stunning scenery.

The Derwent Water (or Keswick 10/15km) trail challenge was indeed that - a challenge. It  starts off rather tame - running along an old railway line out of Keswick. However, it soon takes a turn into the hill and then its all uphill...for what seems like a long way but is apparently only around 5km. But not only is it uphill but uphill through very boggy land - almost lost my right trainer at one point! 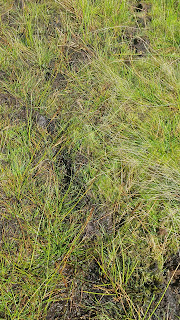 The course sort of skirts round one of the hills and you can see Skiddaw (3rd highest peak in England, in the distance. You can see all the dots of the runners ahead of you. Due to the narrow tracks we are pretty much going in single file in parts! 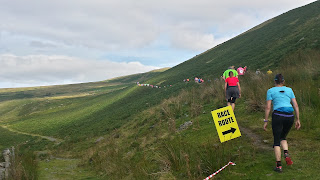 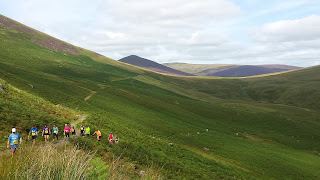 The views are the best thing about this run - you really don't notice the mile passing by (though the blister developing on my arch was noticing for me). My only little disappointment was that there was only one water station which was about 4km from the end of the race. If I had known this was going to be the case I would have brought my own water. To be fair because of the remoteness of the course it would have been difficult situating it anywhere!

There was a pro photographer taking photos for this event. Now my run photos never come out well - I always look like I'm walking rather than running and I was hoping this time it I would get one that looked like I was zooming along. No such luck - the photographer had placed himself in a section of very rocky track so you had to really watch where you put your feet. However, the pic actually came out ok..ish..I certainly look like I'm concentrating! 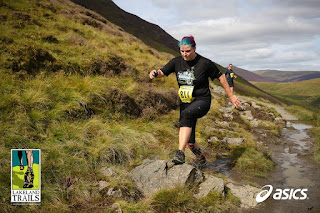 I was thankful when I came to the downhill bit, though by this time my mud-covered laces kept coming undone so I lost time having to keep re-tieing them. (on a side-note, I discovered recently that I have been tying my shoes wrong ALL MY LIFE...I blame whoever taught me...). 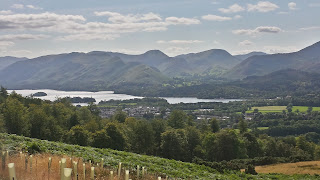 Stunning view of Derwent water as you descend.

My one other disappointment was that as I came speeding to the finish line expecting the MC to be calling out my name and number (while being in awe of my extreme speed) I arrived to noone, even my mum didn't manage to get her phone out to take a finishing photo! Apparently the power had gone off so my grand finish went unrecoreded :( though, someone did shout "I love your hair!" so thank you, random person!

So looking back over 10 years of running I have done 1 marathon, 7 half marathons, 2 10kms, a 15km and 2 Tough Mudders (I would have liked to do one more marathon but I just don't think I can be bothered with the training.
And this is what that looks like in bling (note, I didn't receive a t-shirt for my marathon due to the bad organisation of the finish area, which is still a sore point for me!) 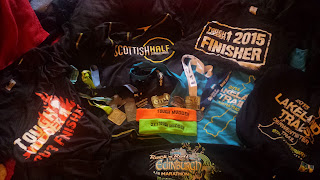 Posted by TheRunninggoth at 08:55 4 comments: