Day 20: Did a fractured elbow, cold and headache stop me doing Tough Mudder - Hell No!!

I know I have totally failed for this year's Juneathon but I felt I had to do a blog for this. I reckon managing a 12 mile mud-soaked obstacle course with a fractured elbow and a thumping headache makes up for all the missed days where I totally slacked. 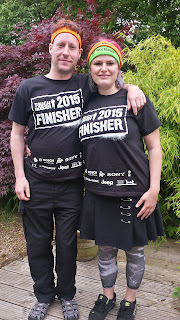 I was told by the nurse at the minor injuries clinic that I would not be doing Tough Mudder...and already by then a little bit of my brain was holding onto hope. The thought of just spectating at the event was just too depressing as was the though that I wouldn't get my special 2-tough mudder headband!. 3 weeks down the line and I had managed to do climb a couple of peaks hill walking in the Highlands and had got a bit of movement back in the arm so I thought I could just run the event and not do any of the obstacles...but then on the run up to the event I was like...well, I could just do the obstacles that I don't really need two working arms for...

In the end I calculated I did over half of all the obstacles. I absolutely couldn't do any of the climbing over wall/monkey-bar style obstacles or anything that would risk me smacking my elbow off something - The Everest obstacle was definitely out...this was updated and looked way harder and steeper than last time!

Now, as if a fractured elbow wasn't enough, I was just getting over a week-long nasty head cold AND I had a thumping headache for the entire day (only abating after a good few glasses of wine in the evening). To say this was a challenge is putting it mild. However, having said that we saw and heard that there was a 71 year old doing it which kind of puts most people to shame!


Now as this was my second Tough Mudder I was allowed to forgo the Electroshock Therapy...however, the special 'Tough Mudder Legion' obstacle for everyone who had aready earned their first headband. This was a monkey-bar style thing which I could do...instead of just going the finish line I decided to brave the Electorshock Therapy again! Now when we arrived there was no breeze and I figured it would be possible to get through without being hit...to my horror when we arrived the evil hanging tentacles were now happily diagonally floating in the now very present breeze! I got shocked once, remembered what a horrible sensation it was and ducked out the side.

So, I may not have done half of the obstacles but I feel I totally earned my green headband and bottle of cider. And it helped soo much having a great team (that is, after all, what it's all about) who helped me round and grabbed my (good) arm to help me out of the mud - thanks guys!!

NEXT year I plan to do ALL the obstacles - the training starts...well, whenever my arm is in fully working order I suppose! 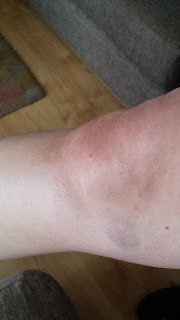